Here are answers to the some common questions we receive!

Q:  We don’t have a spare PC to hand for your software to run on – can you provide one?
A:  Yes, if you sign up for a minimum of 3 years, we’ll happily provide you with a machine up to the required specification to run Rosi BMS on…  Systems are currently being shipped with an excellent high spec solid-state PC – it has no moving parts inside at all, so that’s less to go wrong!

Q: Most BMS systems on the market just pick music randomly from a pool of songs, but yours doesn’t… why is yours better?
A:  Random is random – now that’s not necessarily a good thing!
Ask any mathematician how many people you need to gather together in a room for a good chance that 2 of them will share the same birthday (i.e. any 2 people with the same birthday from a choice of 365 possible dates) and they’ll tell you that actually it’s only as few as… 23 people!  (See the maths behind this here!)
By the same laws of probabilities, if you’ve 365 songs in your pool, after you’ve picked just 23 random songs, there’s actually more than a 50% chance that 2 out of those 23 will be… the same song!  i.e. There’s a more than 50% chance you’ll get a song repeat within less than about 90 minutes with a random song picker!!  Once you’ve heard 57 songs that rises to a staggering 99% chance of a repeat even though there’s 365 songs to choose from!!!!   This is why you’ve probably sat in a pub or restaurant at some time and thought “.. that’s weird, I’m sure I’ve only recently heard this song, but here it is on again!” …  Our system is different and actually thinks about what it’s doing –  it keeps the various artists, songs, tempos, decades and music genres etc as evenly spread out as possible, for a far superior result!

Q:  What’s this about a free trial?
A:  We’re so confident you’ll be impressed with our system, we’ll happily give you a no obligation free 28 day trial of our system – We can do it remotely for almost all potential customers, but you may have to have your PC couriered to our offices if neccessary to have the music and software loaded onto it, and couriered back if we can’t satisfactorily do it remotely.

Q: What are the sound card requirements to get the best out of BMS?
A:  You can use the on-board soundcard on most PCs for one output, but for the best performance and quality we recommend a professional soundcard.  We have used a number of soundcards from the German manufacture “Marian”, like their Seraph range of products with 64 bit drivers. You’ll certainly need one like the “Marian Seraph8” for best quality results on a multi-zone system… ask us to include one in your quote!

Q:  We’d like a recorded announcement system that doesn’t actually play the music in between.. can you help us with that?
A:  We’ve been working on a similar system for another client, but as we are the software developers, we can tailor BMS to do any additional or amended features should the resulting order make this worth while… get in touch and we’ll see what we can do!

Q:  The current system in our hotel tends to play pretty much the same songs at breakfast every morning, in the same order, to the extent that not only does it drive the staff bananas, but some guests have even commented on it as well… will your system be any better?
A:  Most background music systems just play the songs in their libraries in a random pattern, or even, just in the same order ever time! … with a random system there is nothing to stop them from doing things like playing a song again immediately after it’s just played, and we’ve heard this actually happen!  If the playing time of all the songs on the system is roughly divisible by 24 hours, or however long the daily playing time is for that set of songs, then this will mean that a purely random system with not much logic behind it’s operation may seem to tend to play the same songs at the same times every day. Our system DOESN’T play songs at random – it actively seeks to rotate the music around evenly, and even actively blocks songs or artists from playing around the same time as they did yesterday – problem solved!

Q: What happens about Christmas Songs?
A: If you subscribe to any of our ‘General’ Music channels, Christmas songs will start to play in the mix from 1st December onwards, gradually building up until Christmas week. In keeping with most UK radio stations, most Christmas songs stop playing after Boxing Day. All of this happens automatically, customers don’t need to do anything. Any customers who particularly don’t want Christmas songs on certain or all of their channels, or DO want them playing for a longer period, just get in touch and we can arrange it however you want!

Q: It seems like common sense, but we’d like the current chart songs to play a bit more often than the older songs on our current system, but it’s one of those purely random systems again and it can’t do that, all the songs just play… well, at random! Can your system play the more popular chart stuff, for example, a bit more often than the ‘back catalogue’…?
A: Yes, with your own music libraries you can set a “priority” for every song you enter on the system on a scale of 1 to 19, so a song will play more or less often relative to other songs, as you choose…  If you take our music library this is all already done for you too, so as more popular current hits will play more often, and songs move up and down the priority scales without you having to worry about it. This also means we can be “topical”, and slightly increase the plays on, say Whitney Houston songs, for a week or so after her unfortunate death, as people will be talking about the news and what happened, and like to be reminded of her songs. Variation of priorities also helps solve problems of songs tending to bunch together, or certain songs tending to play closely behind other songs, which your staff and indeed regular customers may begin to notice with purely “random” systems. All of this is taken care of behind the scenes with the Rosi BMS intelligent scheduler!

Q: We don’t have internet access currently, how can you keep our music up to date?
A: Where necessary music updates can be provided by post on CDs, so this is not a problem. 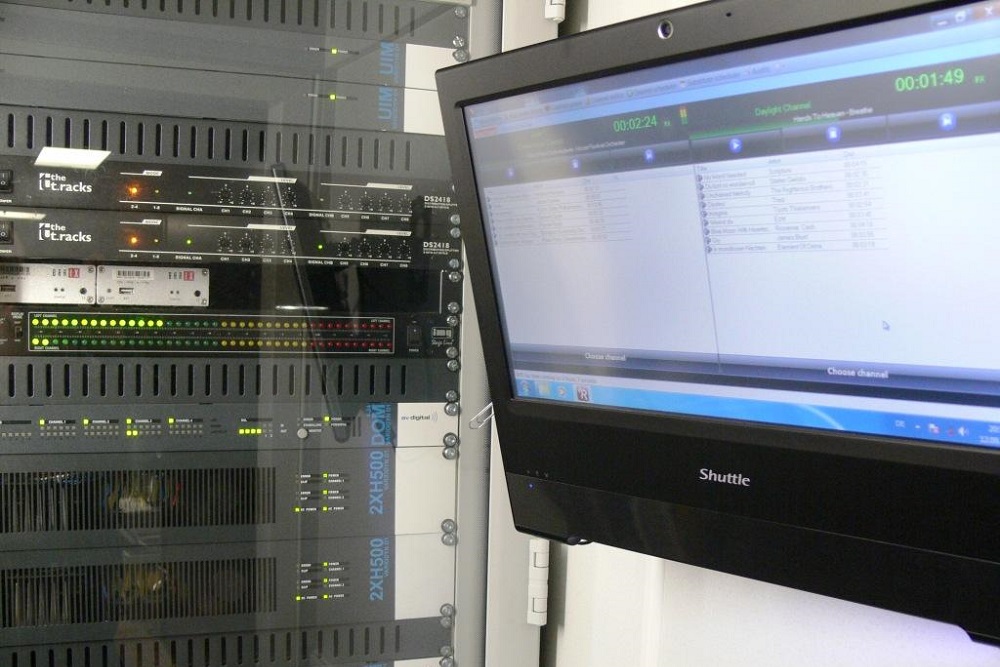 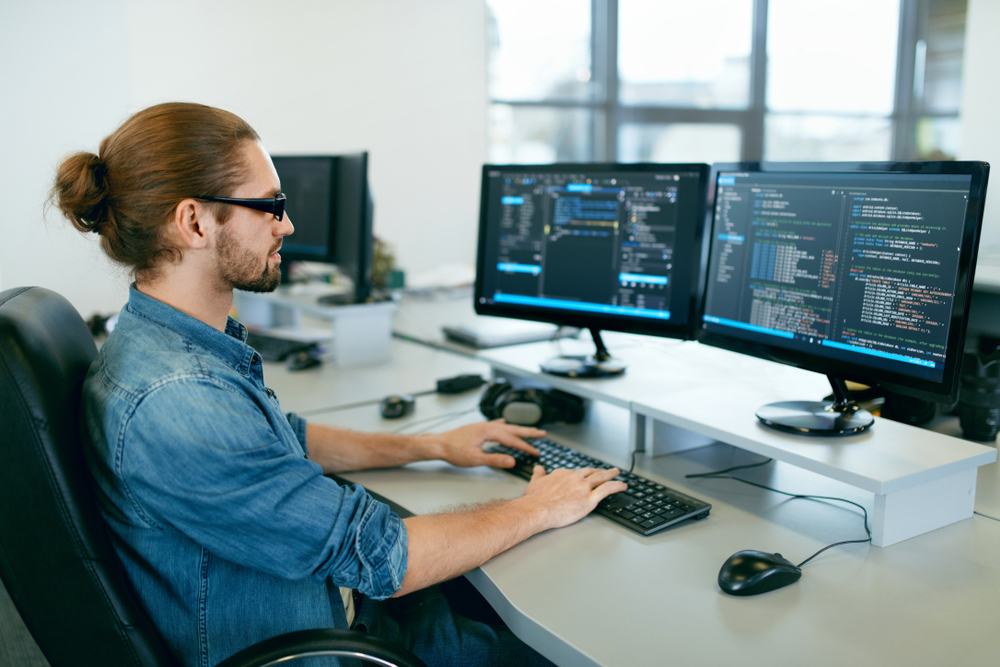 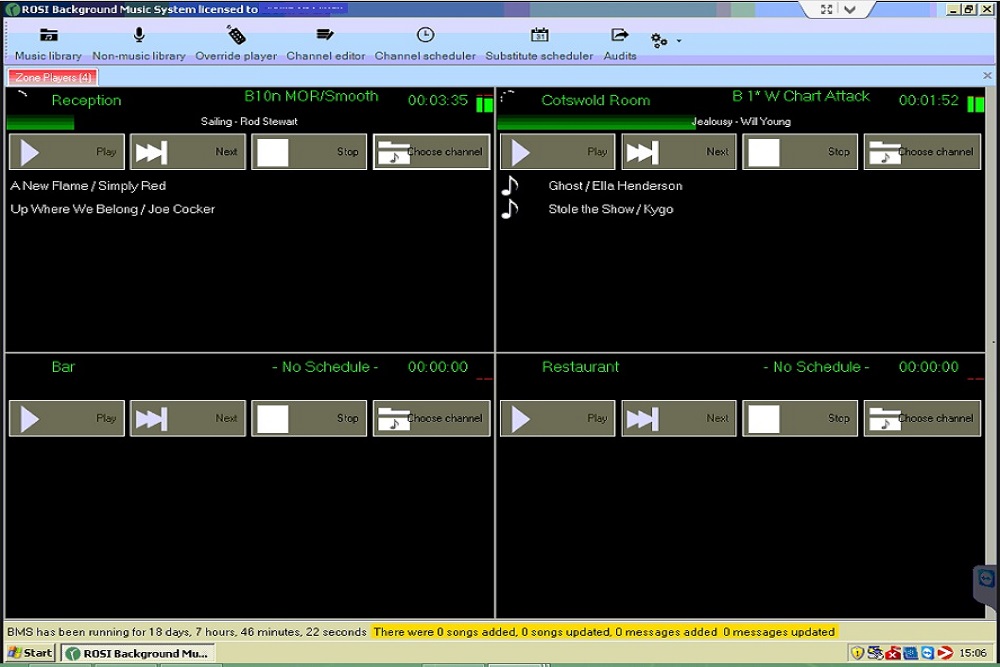 Now, if we’ve not answered YOUR question then get in touch!  We’d love to hear from you and we’ll try to help if we can!

The easiest way to get in touch is to fill in this form and we’ll reply within 24 hours!

If you want an idea of how we can work with your business, don’t forget to tell us what you’re aiming to achieve –
For Background Music, how many separate sites do you have, how many areas in each are you looking for your music system to fill??
If you want a radio service, is it just music, or with promotional messages too? Your own music or our Library? etc